Dr Dris would love this page!

Conversations With the Moon: The Alchemist

While unpacking from a recent move, I discovered small boxes of Dr. Dris’s rock and crystal collection.  Below is my research as to why she had a large amethyst.  She had given me two small ones years ago that stay on my husband’s and my bedside tables. 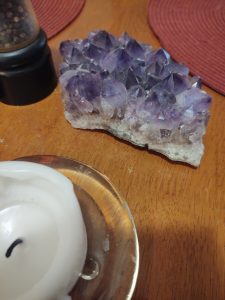 Amethyst is a variety of Quartz and is a 6th Anniversary gemstone.

Amethyst is a powerful and protective stone.  It guards against psychic attack, transmuting the energy into love and protecting the wearer from all types of harm, including geopathic or electromagnetic stress and ill wishes from others.  Amethyst is a natural tranquiliser, it relieves stress and strain, soothes irritability, balances mood swings, dispels anger, rage, fear and anxiety.  Alleviates sadness and grief, and dissolves negativity.  Amethyst activates spiritual awareness, opens intuition and enhances psychic abilities.  It has strong healing and cleansing powers.  Amethyst encourages sobriety, having a sobering effect on overindulgence of alcohol, drugs or other addictions.  It calms and stimulates the mind, helping you become more focused, enhancing memory and improving motivation.  Amethyst assists in remembering and understanding dreams.  It relieves insomnia.  Encourages selflessness and spiritual wisdom.

What significance is this number 9 mean in this year of 2018?

For Dr. Dris, my mom, it was an end of a phase in her life as she passed in the year 2009.  For me at the end of this year 2018, I retire from a working life to enjoy my next phase into the retirement phase of my life.

Per Padre, the messenger of Angels, our guardian angels use “numbers” to communicate. This seems the message to me for 2018 (a muliple of 9) !

The end of a phase

The appearance of the number 9 can be a signal from the angels who want you to know that something in your life is about to come to an end.  It can be a relationship, a project, or the chapter of your book of life.

Thus, the angels want you to acknowledge the fact that this change will result in better opportunities that you can take advantage of.  It is for the greater purpose of your existence that you will be made to witness such change.  Do not lose hope and never let any negativity get to you!  You control your decisions and what happens in your life. 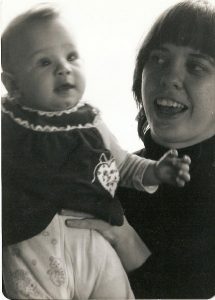 Karen Lee Chow, devoted mother and poet of Rainier, Washington, died on November 25, 2017 at the age of 62 after suffering from Anaplastic Thyroid Cancer (ATC) diagnosed just this past July.  This is a very aggressive type of cancer always considered Stage IV.

Karen Lee was born in San Diego, California on April 25, 1955 and raised her family in Rainier, Washington since the 1990’s.

She grew up as a military dependent and has lived all over the country from Kansas (Forbes AFB) to Laramie, Wyoming, then on to Rome, New York, San Diego, California, Arlington, Virginia (Pentagon), and finally Kailua, Hawaii (Hickam AFB) graduating from Kailua High School in 1974.  As an adult, in the late 1970’s she moved back to San Diego to live with her sisters, then on to Los Angeles where she met and married her husband, Jeff Chow.  As their family grew with their first daughter, Vennessa born in 1979, they moved to Washington state and bought a country home in Rainier.   Jeff is a renowned Chinese Chef, working out of restaurants in both Seattle and Takoma, commuting home at every opportunity to be with Karen and their family.

As a full-time mother, artist, and poet, Karen Lee was a very special person in many ways.  She wrote a journal book of poetry called “How to Feel – Take a Special Spiritual Journey into Thoughts and Feelings” published in 2002 by 1stBooks Library.  In 1986, she had taken a journey of soul and spirit.  Karen went nowhere, yet went everywhere her thoughts could travel.  She expanded her mind with understanding and climbed into the depths of feeling.  With her book, she wanted to touch others in the same way.  Karen didn’t expect everyone to agree with what she had found in the deep recess of her heart, her soul, but she hoped others would hear her out and take their own journey with her.  People, who she only knew online, read her newsletter saying much about her wit, her wisdom, and her poems.   In addition, this book was a family affair to include contributions and illustrations created by her daughters at ages 14, 10, and 23, edited by her mother (Dr. Dris), and with a credit to her son, Matthew Chow, for the idea of her poem, “No More Gloom”.

There is a special place in her loving family’s heart and in Rainier, Washington, where a beautiful tree is planted in her memory.

I just posted below on her website!  Check out the changes!  Spaceship Doris