We can start by examining if it is time (at the beginning of) this (new) millennium in this 21st Century to connect again to the center of our being where all our thoughts manifest into form.  It has been recommended by many as a reliable alternative method of transition into this Age of Information and Energy (I&E).

Recognized as the primary issue of this next 1000-year millennium and the overall social focus on Earth as a whole, I&E’s methodology can be utilized to assist in the current spiritual growth and scientific advancement movement.

In the following explanation and discussion, it falls under the heading of Phenomena, which in itself is a viable and broad enough base at the very least to place a theory. At the very most, it is a beginning foundation for a future that is not yet in the making but is slowly encroaching it.

The greatest game in town that came on the scene in the (first) years of this new Century was the one that attempted to totally ignore or reason away many of the unexplainable phenomena taking place.  It caused many rational people to become very irrational in society’s eyes.  This is the competitive condition existing in scholarly society (today) – – an ideal place to agree to disagree.

Phenomenology is a term used in (the early part of) this last century that is slowly returning as the new insight format on which to base a renewed interest into the mastery of Mystery Sciences.  All of the (new) communication fields available – Web Sites, Internet, e-mail, Electronic Publishing, Radio Talk Shows, Video and TV network specials, and podcasts/social media (programming) have provided (new) ways to explore and share with others the invisible and the unexplainable fascinating mysteries of life (with the modern computer assistance).

As Dennett mentioned in his book, private intimate communications had almost ceased to exist, but group and worldwide communication avenues have opened wide.  There is an excitement and a widespread curiosity about what is happening in the world outside of our individual circles. This interest is probably what allows many to think that our private inner communications have become a public display of conscious social sophistication awareness.

Understanding how phenomena triggers consciousness expansion is a good beginning. To start to realize what is happening in the world around us in less technical terms does lead to more understanding.   Dennett quoted Kant’s description of phenomena as “things as they appear to be” while nomena is “things as they are in themselves.”

Phenomenology’s scientific pursuit in the past was to discover a new foundation for philosophy and a consistent easily understood methodology.  This doctrine grew up early in the 20th Century as a philosophical school or movement around the work of Edmund Husserl. 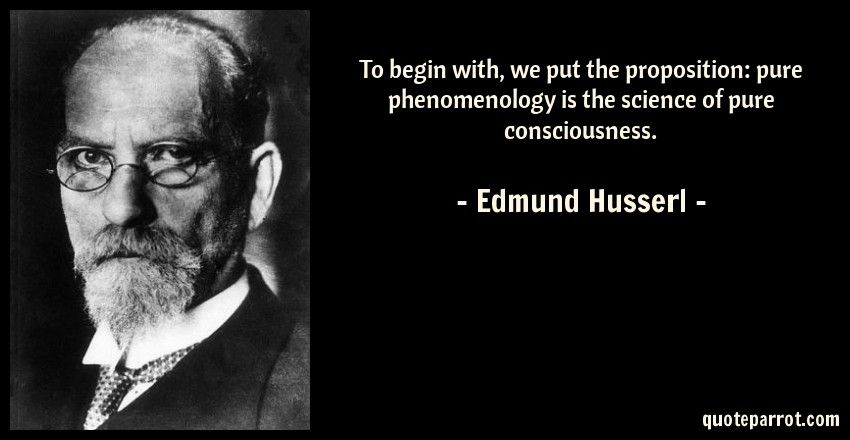 Its purpose or goal then was to build a new foundation for all known philosophy or for all knowledge available at the time.  It was based on the use of a special technique of introspection, which resulted in an interesting investigative state of mind that becomes more thoroughly acquainted with the pure objects of conscious experience allowing our mind to act as a detached third person observer.

“Quantum Physics” is an example of how this works.  Many metaphysicians use this form of detachment in their own development of self-awareness techniques.  It is a way of processing circumstances that revolve around mental and emotional factors, and is used to think more clearly to reach ideal supportive life decisions.

Phenomenology in the past had failed to find a single agreeable method of proper introspection that everyone could accept.  Unfortunately this is also true (today) of many of our (new) sciences.  So there are no known available phenomenology practices in this day and age (other than some questionable ESP investigative methods) to study and to model ourselves after, no known experts (uncontroversial and/or accepted) on the nature of things that dwell in the stream of consciousness, according to many experts.

How does this relate to “The Challenge of Social Sophistication?”  The subject of Phenomena is highlighted in this spiritual philosophical way because it is a predominate factor.

In this examination of human religious reactions and responses is the supposition that experiential phenomenon, as it relates to the male and female human anatomical functions, often determines how human beings, as a whole, view their own related spiritual consciousness by the preceding sample of three “phenom” experiences.  It is not enough that we consider the mechanisms of the human body form and how it’s energies operate differently in women and men.  It is imperative that we examine, also, how the brains in both genders’ function and thought consciousness expands as each sex matures developing automatically the following three aspects of relative consciousness: