Currently there are many different opinions surfacing about where the Mind actually dwells in the human body.  DNA advancements in scientific research technology are dislodging many exotic viewpoints as to its location.  Can it be, as we metaphysicians have known for ages, that the Mind truly exists in each and every cell of our being, which connects us with the Universal Mind that surrounds all things and dwells in all things?  DNA experiments are beginning to logically substantiate such a supposition.

Notice, also, there are (that) the three views of consciousness appear to be similar to the list previously mentioned for the three aspects, which make up the word, Phenomenology.   See the end of earlier post. (Examination Time and Phenomenology) 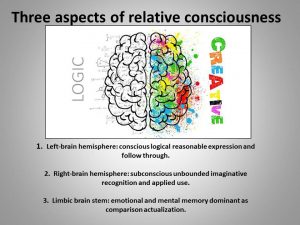 The first part in the External World is logical reasoning thinking (which is the function of the brain’s left hemisphere).

Let us now consider the examination of the consciousness that exists whether we are aware of it or not in our inner world and where we uncover the Right Brain’s access route.

The second, the Internal World, is also where one goes when in prayer and meditation. The right-brain hemisphere is the way and access to spatial unlimited activities.  Finally, the third, the emotional and mental affect all this has on the individual, is located in the limbic stem area of the brain. The Limbic has also been referred to as the seat of the emotions for it has a direct connection to the heart. In this area location and connection, it is considered humanity’s original brain formed millions of years ago, which is said to house the soul and all the memories that it has experienced since its formation. More about this important part of the brain will be discussed later.

A systematic scanning of a translation of some of Husserl’s later works provide some understanding into why there was no common agreement on the protocols necessary to the establishment of a basis for this particular type of philosophy. 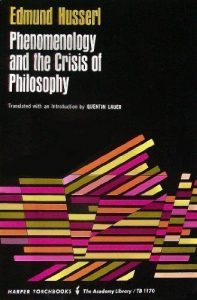 The book, “Edmund Husserl – Phenomenology and the Crisis of Philosophy,” is translated by Quentin Lauer (1965:23) and provides necessary background information. This comparative analysis of the two related subjects chosen under consideration — (1) conscious awareness and (2) phenomenology — is a scientific awareness study of philosophy as a transcendental state of pure reason or the science of science.  It provides ample opportunities and examples of  “Male and Female Energies” role-expansions as we enter further into this new millennium, called by many as The Golden Age.